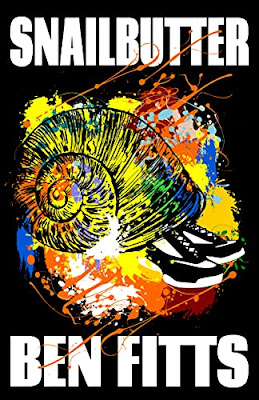 A campy horror of regret, synchronously morphing into a monstrous, unexpected outcome. High school adultescent can be tough sometimes, especially if you’re hiding inside a snail shell refusing to come out, shelling out the world around you even your best friend. Snailbutter is a Bizarro punch of imagination packed with evil genetically-modified animals, sexy robots, Nazi scientists, cannibal lovers, cute British girls from other dimensions, and much more. What will become of Brian while he is inside the giant snail shell?

"Brian and I walk down the hallway to our lockers, weaving in and out of all the other ninth graders. The aroma is a mixture of pubescent stench and kids who are still figuring out how much deodorant and/or perfume is too much, so it’s not the best. But I guess bad smells come with the territory of teenhood."

Human monsters, real monsters, Manson and Mengele as teachers, scary animal hall monitors aka Farmpals, robots and cyborgs, cannibals, a big ass Nazi bear roaming the halls, elementary students used as experiments in shop class, kooky character's and insane enactments in the schools, murder and mayhem and a teenager who crawls into a snail shell and won't come out.

“Boys of that age, and girls too, but mostly boys, find oversized shells and resist coming out all of the time. It’s part of growing up.”

Feeling awkward and trying to fit in with your peers is a very difficult time of being a teenager. When Brian crawls into that snail shell, it feels familiar. As a teenager sometimes you just want to hide from the world. Thankfully Brian's best friend Doug sticks by his side and does not give up on him even when the true nature of Brian is revealed.

Bizarro is so much fun to read. The creativity in this is amazing. There is a lot of horror elements that had me cringing and tons of humor that had me chuckling. All the elements in this were just crazy imaginative. It plays out like a full on movie production in your mind with it's vivid imagery and detail.

I have to give this one 5 stars for the wondrous and crazy world that was created!

The Garden of Bewitchment (Fiction Without Frontiers) by Catherine Cavendish

Karla's Literary Korner
My name is Karla Kay. I live in Montevideo, MN in a river valley where the Minnesota river and the Chippewa river converge. I am a Special Education Paraprofessional specializing in elementary school students. I write reviews for small publishing companies and independent author's. I am a very diverse reader as I enjoy many genre's. My reviews are posted on Amazon, Goodreads, Bookbub, Storygraph, and Book Sirens. Reading for me is a comfort. I know when reading I can escape into whole new worlds with excitement, adventures, imagination, time periods, cultures, reflection and growth. Over the years my passion and love of reading has grown. One of the reasons for this is discovering there is a whole world of independent publishing and authors. Reviewing books has also become important to me as it boosts author’s profiles, promotes and shows support. It also creates a connection between readers who share the same tastes, opens up discussions, and often gives new insights and angles. Sometimes a reader discovers great books through a review that has been shared and oftentimes a discovery of an author that may just become a new favorite.

5 Stars: Excellent! Highly Recommend! 4 Stars: Really Good! Would Recommend! 3 Stars: It was alright. 2 Stars: Not particularly enjoyable. 1 Star: I did not like it. 0 : If I DNF a book, I do not display it or talk about it.

Karla's ReaderRank
Karla has reviewed 708 books with an average rating of 4.375 out of 5.
1812 people have found Karla's written reviews to be helpful on Goodreads.
See more...

Top 20% in books from small presses

307 members
Horror, Fantasy, and Science Fiction Even though our main themes are horror, fantasy, and science fiction we also love other genres too which are reflected in threads within this group. If you love spooks, dragons, demigods, crime and mystery stories then join us.

658 members
Come for the Castle - Stay for the Terror! 🏰🐺💀🔥 This group is for everyone who loves vampires, werewolves and creatures of the dark books. Horror, gothic, classic, fantasy, paranormal, whatever! All genres welcome. We have featured authors throughout the year where we will read vampire, werewolf and all sorts of things that stalk the night. We also do book challenges, buddy reads, and we have other fun stuff to do on here. <img src="https://cdna.artstation.com/p/assets/images/images/016/128/762/large/chang-wei-chen-castle-0213-2.jpg?1551022328">

20175 members
If you love horror literature, movies, and culture, you're in the right place. Whether it's vampires, werewolves, zombies, serial killers, plagues, or the Old Ones, you'll find plenty of great discussions and recommendations at HA. Find us on Twitter: @HA_Goodreads